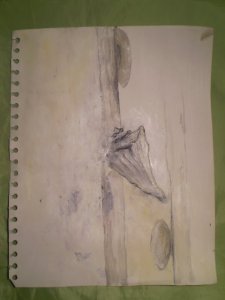 Funny – it seems so urgent that I start this now. But, I’m not even sure of the date. My temporal grasp of time is poorly aligned with the clock and calendar. Unfortunately, I can’t indulge my tendency toward unstructured lollygagging. That often, anyway…This is the first picture, the one I began with.

When I have time stretched in front of me, when the kids are with their father and I have a day off work – instead of going to see a movie or visit with friends, I just stay home and try not to watch the clock. These segments – like ellipses – are precious to me. I don’t want anything to interrupt these spaces. It is during these times that I get my best ideas – some of them are true brilliance, most of them forgotten as soon as the kids let the screen door slam.
I was writing a letter to a friend, wishing I could play guitar better so that I could send him a song. But, a song didn’t seem quite right. So, I drew him a picture instead. The next day I drew more pictures. It’s late, I need to get to the point.
I am going to do it. I will draw a picture a day for the next year. A picture a day. For 365 days. What if I made them tiny? A doodle during a meeting. This is why I need rules. The picture will be sincere – i.e. not drawn simply for the sake of fulfilling my obligation. Jeez – is that rule even possible to follow? I mean, once there is an obligation in place is it humanly possible to prescribe to obligated actions and yet be motivated outside of the realm of the obligation?
I have thought a lot about art as I’ve done these first two drawings, which are actually mixed media paintings. Like so many would-be artists, I need the discipline. This is how I’m choosing to make sure that I don’t let weeks slip by and forget how much I love to draw. This task – all those pictures!- would have been insurmountable even a month ago. But, things change. I turned 33. I have lines in my face. I realized, finally, that anything that makes my heart feel less heavy – and drawing for old friends lightens the load considerably – should be regimented. But, in a gentle way.
So, forget rules. I will try to be sincere. I will try to explain. I will try not to explain too much. I will get it done. 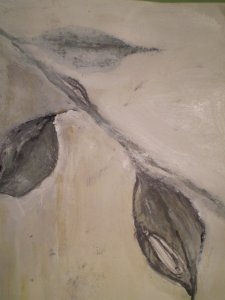 This is a detail of the second picture. The fireflies have stayed late this year. Impossibly into
near-August. The leaves simply begged to be
boats.
I stayed up late – too late! – painting this, but really I was waiting for my daughter to come home crying from her first sleepover. She didn’t.
More later. (eek! tomorrow.)