I WIll Never see U AgaIN 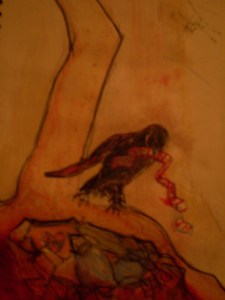 ” I keep assuming that everything stays the same. But, it (everything) doesn’t? Does it?” I found myself writing these words and am almost 100% positive that they are somehow plagiarized. Popular culture really makes me doubt the existence of the original idea.
A few years ago – okay, seven or eight years ago – I was taking this Creative Writing 101 – type course, at a satellite campus of the community college. And so every Tuesday I’d drive down to the SE Industrial District and park under the bridge ramps, and walk to the nondescript yet somehow modern or perhaps modern because it was nondescript (I don’t even know what the relationship between modernity and nondescript is. But, I sort of sound like I do. Ha!) building where my class was held. There was not an empty seat in the classroom, which was carpeted and office-y. Firefighters, retirees, a young environmental education major who had just travelled to Europe with a professor. Me. Some others. Nice, nondescript, a ponytail. This is what I remember.
I didn’t stay in the class long, because I realized that writing made me loathe my husband, who had only been my husband for about six months. So, pregnant, I quit the class instead of try to negotiate why writing made me feel oddly out of place in my own life, I just avoided writing.
Anyway, while I was in the class, we had to write a story about relationships – or a relationship . We learned that the environmental ed girl had slept with her professor in Italy and we learned that the tattooed garden-small-talk lady (me) had a penchant for socially conscious sci-fi. What this means is that I wrote a story about Conjoined twins in the future. There are lots of them. The result of a birth defect caused by food preservatives. There are so many conjoined twins that they have a vibrant subcultural enclave in major cities, but remain shunned in smaller towns. When a new surgical procedure allows doctors to separate twins with the unique type of conjoinment that is the trademark of the defect, it becomes an ethical question for two twins – one who wants to be separated and one who does not. Blah, blah, blah. The story was published a few years ago. It got good reviews. I, unfortunately, never got around to turning my short story into a novel. In fact, after reading it in class, I never thought about that story again. Until I read the synopsis of the eerily similar book that had been published. I am in no way suggesting that the environmental ed major stole my story. I honestly don’t think she did. I think that there are just not enough really good ideas in this world. Even conjoined twins in an ethical struggle over separation is a no-brainer in this strange world.
So, I completely forgot why I was telling that story and how I went from talking about painting to talking about writing. Oh yeah. Nothing stays the same.
Thank god.