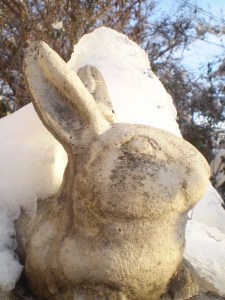 Note to Unnamed Ally via email to Myself:

Your website is kind of intimidating. Just ’cause it’s so professional. I am so clueless at that sort of thing. I guess that’s what I get for majoring in silly old sociology instead of some creative field. I quit design one. It felt forced. I guess re: function is that if a light bulb is integral to the thing you’re making, then maybe it can be a lamp – But, sticking a lamp onto something just to make it functional just makes it seem like it wasn’t good enough on it’s own. So, yeah – function…isn’t being interesting and creating wonder in some small way function enough. I’ve hardly emailed myself at all today. Dang.

Except this: which is a response to a remarkable new friendship.

The thing is: I am such a nobody. Then again, who isn’t?

I have an awful lot of good ideas. Too many in fact. Most of them require collaboration with other human beings. Which is a big fat bummer. ‘Cause I’m so lousy with the people sometimes. Or rather, I just don’t have the energy for the people sometimes. Mine is a life that requires a significant amount of headspace – in the span of one day I am a mother, a dinosaur, an advocate, a woman who hides dirty dishes in the oven and draws too many pictures of rabbits.

Again with the rabbits. This is a very dramatic 10 minute drawing. I find I am becoming cursory in my sketches. Get it done just to get it done. Oh well, it’s winter.

The big fish painting is an early morning’s work away from some state of satisfactory-for-now completion. I had to cover the children’s paintings. Does this make me an awful mother? Let them paint on the wall and then cover it up? It was, I must note, uncovered for weeks. And it was visually jarring for weeks.

I told them, in the artsyfartsy way they seem to respect that I was “masking the work” because I wasn’t “sure of it’s direction.” Or some such crap. I don’t know. It was 8:30 in the morning. 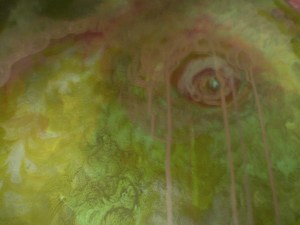