This is a wedding gift for a couple I don’t know at all.
The medium is borrowed from the artist engaged.
The subject: my version of a crocheted placenta.
A small one, a third-month placenta…

Thanks for the notion. It was fun to try to crochet something other than a straight-line scarf.

Straight lines will only get you so far.

Credit for awesomeness will be given with permission to give credit.

Dang. I feel so suddenly foolish and frightening. But, with this comes the understanding that my tendency to make beautiful/interesting things in people’s honor, often inappropriately, is surely linked to a bottom-line need to make things. I need to focusfocusfocus on the making.

To everyone I’ve ever shocked by my hasty generosity of heart in the form of undeserved presents:

I’m sorry if I made you feel weird and beholden.

(By the way, to whom I long ago sent a collection of cocoons, I want it back. Especially the one with the leaf imprint.)

I never, ever mean harm. Which is not to say I’m harmless. However, sometimes a person prompts an idea or a tribute. And the notion of this thing they catalyzed – whether it’s a little book, a collection of cocoons (I want it back.) – or a small bird in flight made out of an old guitar string…

These small projects that people inspire are some of my favorites and the work I do for others is often more mindful than the work I do for me. I mean, what do I care? I know what I mean. But, imagining what a person may say or think about a small, remarkable thing is really an interesting thing to think about. (This is where art can get manipulative.) (Ick.)

(It is important to note that rarely do I have any goal in mind in giving small gifts. People can like me or dislike me.

Except, in general, I really want them to like me.

(The sad-side of this gift giving is if something about someone that I felt certain was worthy of gift turns mean-spirited and does something like not even comment on the fact that the cocoon had perfect leaf prints on the curve of it’s weird woven surface.)

I think I’m going to start keeping the presents I make for other people, or just start making more.

Give everyone a present. Then nobody would freak out if I did something beautiful with them in mind just ’cause I was so stoked to do it. I was really happy hooking this small shape into being.

I’m all mused out.

I was trying to wrap my brain around how interminably long this winter is. How it has become a major focus of my work and distractions and how I am so sick of weather right now, with the chickens mysteriously phobic of their coop/sculpture and thus roosting out of the rain on the top step of our front stairs. Everything is so dang muddy.

I found some new muse material in the form of crocheted donuts. I have to get permission from the maker of said donuts prior to providing a digital pathway to the documentation of their really mysterious existence.

I can’t even deal with how much cleverness there is in the world. I get glimpse and my brain goes off in all kinds of crazy directions. This is the primary reason why I keep my world so smallsmallsmall these days. The ideas will eat me alive.

Maybe I’ll try to draw that today. It would be hard to draw an idea. Is it a bubble, an ocean, a network of roots or the soil that feeds them?

2-hour delay at school today. And the children continue their descent into the feral nature of a child forgetting that school exists. Of course, they would be out today anyway.

The boy has to have his two lower baby teeth extracted. These were the first teeth to break through his infant gums. Now, he has worn them to such nubs that there is nothing of substance to become loose, to lose. His big, gnarly grown-up teeth have burst up behind his old, worried sockets.

I was so looking forward to my children losing teeth, but not in this way.

The girl, in the meantime, has a cavity. Of course. It’s remarkable that she has only one. She seems extremely sensitive to the sensory demands of dental hygeine. Hygeine in general, really. This is something we work vigilantly on.

However, I am beginning to note that nagging is a wicked huge timesuck and seems to make everything unfun. Hmmm…a quandary, for sure.

The children’s father and I will strike an uneasy truce for the sake of dental drama. It’s raining hard and the sun seems reluctant to rise.

Good thing I lived in the northwest for awhile. I see the strain of endless winter in the general countenance of friends and family. My mom’s voice sounds warbly and fretful too often. My father’s obsession with inclement weather patterns seems to be a cardinal trait now that all the weather is inclement.

(If this word, “inclement” comes from the opposite of “clement” – which means, I think pleasant and kind and forgiving…well, that’s sort of a nice way to think about lousy weather. As being in-clement. Un-clement. An entirely different sounding word.)

So, I have a bit of a developing issue with verbosity. I seem to be logging a lot of words this week. Why, yesterday alone I must have written over a thousand.

Digital data is so easy to measure. Click-and-enter becomes a game.

School’s off, dentist looms. Going back to sleep before oatmeal.
Sent from my Verizon Wireless BlackBerry

I drew this cicada exoskeleton because it seemed
the closest thing to an idea I could come up
with relatively early in the morning. 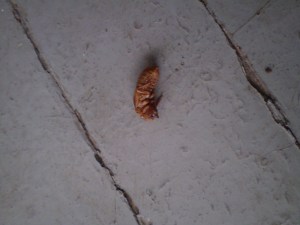 Hollow is hard to draw. Still, I am surprised by the relative ease with which I am able to sketch the crispy old skin of a bug. Specifically, relative to the difficulties I encounter in trying to draw a simple human face.

And it’s the expression that always gets me. How just the tiny line can take a face from thoughtful to sad, can add years of trauma to a countenance. I’m not sure how other people’s memory works, but mine is like a movie. I could count the number of teeth that show in a person’s smile, even if I’ve only seen that smile a couple of times. Just because of the picture I have of them in my mind. I pick up subtlety hard. And some say I’m sensitive, but I’d say I’m a freak of observation. With a memory near photographic. Of course this doesn’t stop me from doing things like accidentally pouring wood pellets into the washing machine.

(True Story. Approximately 11:45am)
Both have hinged lids, things are put inside of both. An honest mistake in an moment of intense multitasking. Kids and phones and dogs and laundry and heat. It could’ve been much worse.

So, yes. Multitasking. The practice of doing more than one thing at a time is key. How else would I have all these words? I was probably thinking about them while I was sweeping the floor or doing the dishes or talking to kids (“Mom! You’re getting distracted again.”)(And this is the downside: I am never wholly where I am, I am always half-way elsewhere.)

I’ll need to come up with something better than that, won’t I?

Paper to draw on, mid-grade. I have finally drawn through most of the sketch books I have laying around. I’ll draw on anything. But, sometimes new paper is exciting.

Huge tube of economy white acrylic. Need to clarify: when I covered the children’s wall art, I covered it with

It would be rude to paint over them. I’m working on an idea – very vague still – that will preserve their paint-on-wall whimsy, but soften the shocking brush strokes of young hands. False framing?

On the subject of framing. It is, as I accrue show-worthy quantities – a bit hard to conceive of framing all these slap-dash drawings. Hence the old wood and tiny brass upholstery nails. Framing is weird to me. Expensive and labor-intensive.

I wire-nailed a lovely piece of fabric to the wall tonight. It was on the 2.99/yard table at the fabric outlet in Swannanoa. Nice ladies over there. Very capable, though getting older. It smells very textile-y in there and they have begun to sell all sorts of non-fabric miscellany. Clocks and Jewelry. Huge bins of toilet seat covers in bright teal and pink, 3.99/lb. My living room is $6.47 prettier. 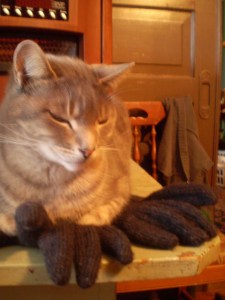