(a segment of backstory)

You know what I’ve realized: my memory isn’t so great, after all. Well, maybe it is…but, I can only remember my own perspective…

Whatever. I’m not feeling as brilliant as I felt during the full moon weekend. Figures. Oh well – I don’t consider myself manic in anyway…just sometimes more clever than others.

I was prescribed Zoloft for Social Anxiety…man, that shit put me through the frickin’ roof…and the crazy thing is – all the manic (truly manic) energy went into the purchase and set-up of six freshwater aquariums.

For five days straight, I drove to the Fred Meyers on Broadway and bought an aquarium set-up at 7:00am. Rushed home and set it up. (One morning, day two or three, I also muscled home some early morning shelving units, set those up…wham bam…efficacy at it’s finest. Except that ALL of my energy was going into aquariums.)

and, mysteriously, a goddam knifefish

through the kitchen
past the sloping sills

and through the damp
crumbling floor

On the fifth day of fish, I realized that I had joyfully and self-righteously spent over $700.00 on freshwater aquariums.

The guys at the aquarium store were starting to look at me funny. The girl waiting in her car every morning.

Not anxious, or freaky, or scary.

I mean, “Hey! There’s no problem here! I’m just here to get some fish!”

It was on the 5th day, when I struggled to drag the five gallon bucket of water, 1/2 full and still sloshing all over the floor, that I realized something might actually be a bit peculiar about all the fish buying.

“Cool, I’d like an aquarium.”
And then we sort of stopped talking about it.

(I do recall the mad rush to victory, i.e. An impeccably installed aquarium where there had not been one the night before, as if by magic. The packing materials piled to the side of the back stoop. Yup. Let’s not think about them. If it hadn’t been so f*n c-r-a-z-y…well, it would’ve made a funny candid camera: The Sudden Aquariums.)

So, yes – the aquariums.

One morning: “What the fuck is up with all these aquariums?!”

Called the prescribing Dr. Gold (his name) and explained, in quick panicked bursts, the situation.

(Shit, this isn’t making me sound sane at all: my thinking then and now. Oh well.)

I try to explain a little more and am encouraged that he actually sounds concerned:

“You spent how much?” He calmly asks.

Feeling sickish, I tell him again. “But, I put it on the credit card!”

(the reconstruction of a childhood memory, paid for with plastic)

“Listen to me, stop taking the Zoloft. Really, don’t take it anymore. Double your dose of risperdal for three days and then drop down to the regular dose. Do you have an prn script for clonopin?”

“Uh huh.” I nodded my head, wiped my nose. I guess I was crying. I really hated that sort of thing, the Dr.’s calm detached voice.

(My mom flew out and helped me, about a month later to deconstruct all the fishtanks and bag the fish and take them back to the aquarium store.) (We moved the empty tanks to the basement.)

“You can take up to three clonopin a day. When is your next appointment with (whatever her name was, in her dark green office: some therapist?)

(The cafe on the first floor of the building on the corner of 10th and something or other? It had good BLT’s. Actually, the sandwiches were sort of greasy and gross, but my mom liked them and so I ate them.)

My memory of that time culminates with orange light in the early evening. Mywhole bed, my whole body smelled like chemical sweat. I couldn’t even sign my name on the job applications I was trying to fill out, they shook too badly because of the risperdal. Risperidone.

I don’t even remember what all they were. Some were duplicates – as in ibid – twice daily. Effexor, risperdal, clonopin, wellbutrin. Did he have me on lithium then, too? I don’t remember the lithium level tests…but, I don’t – understandably – recall a lot of the details of that time.

And my mom signed my name and I got a good job near the Park Blocks and then…well, a year later I was at a different job…

and I was pregnant with the boy…

and I was just trying to keep going.

Because that is what people do, isn’t it?

Funny: when I found out I was pregnant, I stopped taking all the pills, slowly. And, in the end, after the last chemical sweat, well: I didn’t feel much different.

I think there should be legislation to protect people under twenty-five (whose actual, physical brains are still developing!) from being prescribed psychotropic drugs.

I have many thoughts on this, but I’ve posted too many long posts lately.

I am working on an imagining re: my Uncle Marcus – I know I said that I’d not build fictions, but sometimes the only way we can understand a thing is to

imagine what the truth of that thing must be.

The pictures are of hollyhocks…

They were taken with the phone/emailer in front yard about an hour ago.

Art is full of tricks, isn’t it?

Today I came across the plant name:

(some sort of shrub)

…and it made me smile and so I guess it will all be okay. I just have to keep making things because (honestly) it’s about all I am able to focus on right now. 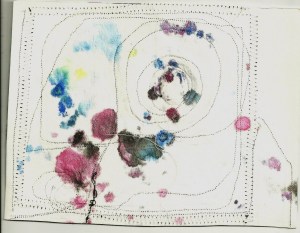