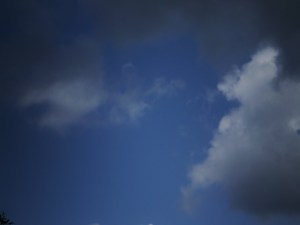 Man, I think I bugged a couple folks out with my impulsive Ms. Carutha video. Totally lucid, by the way. Found her hat, dug out the old Goodwill dress with the whoppin’ huge flowers. Jammed some curlers into my mullet-bob hairstyle. Curlers don’t stay in straight hair worth a damn.

The whole thing took about a half an hour. Well, worth it.

I have said that I speak for nobody but myself. However, is it fair to speak in an approximation of what you may imagine others are thinking? If you hope that

I have no idea what anyone will think about anything.

I could jam things up quite well, couldn’t I? That is not my intention, but anything that makes the poker face flinch, the slack jaw smile, the tired wake up a bit, if only to say, “huh?” –

well, it’s worth a momentary jam.

The clouds were fairly remarkable today. Definitely portent, storied. I think that is what caught me about them initially…the traits recognizable across day and distance. Like characters. As if the clouds are telling some old story…parting and merging and flying and reaching and curving and falling into tiny holes punched in the sky.

If nothing else – the fact that I have been noting them fairly consistently for months…months!…

Well, the fact that I am not able to dismiss them as easily as I would like…being one who relies heavily on empirical evidence…

Well…they are still there and they are still the most beautiful clouds I have ever seen. The sky is bigger than we might imagine…and how does it escape our notice that we all share the same skin?

We are all cut from that filmy, glowing cloth of what looks like air unless you look without assumption of knowing all the answers. 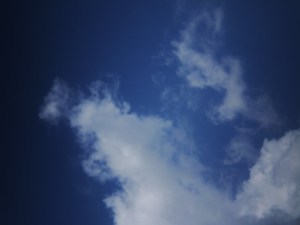 Could somebody please get The Artist on the phone?

We need to have a talk about…clouds?

I don’t know anything. I know I am hungrier than I have been and that I loved the wind and speed of bike riding today.

I know my girl had an awesome birthday party and even though she cried when her dragonfly balloon floated free into the air, it’s string cut by low hanging branch as bike riding balloon girl rode past…well, she didn’t cry long and the balloon only rose so high and then, held in place by atmosphere, it just scooted across the ceiling of sky, towards the clouds that stretched on and on and on. 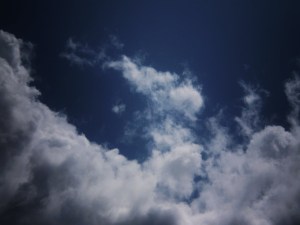 I need to decorate for her birthday morning surprise. Which is no surprise…those in this house wake up to balloons strung from the ceilings in their favorite colors and presents at their place at the table.

It is something we started doing when the kids were super tiny…any excuse to string balloons across empty space.

All these pictures were taken yesterday, from my usual vantage point – the porch. I like to take pictures of formulaic clouds in other settings, but I also appreciate that the stage is set the same, so to speak. It allows me to see the clouds more clearly, not having to be distracted by setting.

Or so I thought…I noticed something yesterday, when I was taking pictures of the clouds that seem to be getting more intimate with the tallest trees that line this street…and I need to document it further, but I really think folks should start reckoning with the fact that a picture is worth a thousand words and I have thousands of pictures. Not because I am a nutcase, but because I have spent my life noticing things few people seem to notice. It is sort of my hobby, and the way I keep myself sane. “Notice the small things!” I used to say…and then I noticed the sky.

whatever…I think it’s shame that nobody notices them…of course, if folks were to notice – they’d probably just start arguing over what they might mean. Which is pointless because clouds don’t mean anything in the context of our modern cultures…because, as a species, we have the remarkable qualities of presumption and arrogance…

I think we ought to check ourselves. Clouds or no clouds, we are screwing up…royally.

Much more to post re: painting process, music, energy and B vitamins, birthdays, lost teeth lost and then found…school starts tomorrow.

I think I want to work at a grocery store. I get some good thinking done at grocery stores. Fortunately, I am usually able to think about a few different things at once…sort of…I tend to be fairly distractable. Nonetheless, I function well on automatic and have very nice manners. I am made for customer service.

It is really hard to be oriented toward considerations of social justice and to be formally employed in industries that impact – or could but don’t – communities. A lot of red tape, a lot of mis-spent resources, very few effective systems of oversight.

Whatever. I have to go help my son’s teacher move some of her seldom-used props and supplies to school storage. Whew.

It is her birthday today, as well. Viva August 16th.