I think I will write in neutral, second-person ‘She’ this morning, since sometimes things are best considered from an exterior perspective.

She woke up and rolled over to see the sky just a pale grey shell through the branching hedge. She rolled over, her arm numb with sleep, and immediately began thinking. This is not anything unusual, she has always woken up full of thought.

And it occurred to her that the writing she had done last night was, itself, ‘cagey-sidestepping’ a great deal of truth. That great separations had already been made – even if they are hands not yet played out – and that she really had very little control over any of it.

Something had been laid out for her and problems were unavoidable.

She had better get up.

Feeding the dog and cleaning up the chickens’ mess from the night before, she considered how strange it all was. To finally understand all the things in her life that had never made sense and, yet, somehow this new sense seemed to somehow to put her in danger. Even stranger, as she sat on the front step, smoking a handrolled cigarette and watching the cars drive by, she realized that it was all just terribly and wonderfully unavoidable.

She told herself that the cars were just cars, but considered the possibility that perhaps one of the emails she had sent in the late summer was actually received with notice. She understood that such musing could be considered delusional. Her consideration of possibility and the placing of seemingly insignificant events in pivotal positions had always made her seem odd to others.

She knew this was true, was okay with it.

She knows that she is a good person, but considered, as well, the possibility that her name had long ago been placed on some list for signing some petition or another, being on some info shop’s mailing list…for being some imagined threat.

She thought about how she had actually called the Federal Bureau of Investigation, because aren’t they supposed to investigate things? She was very good humored when she was informed that the FBI does not ‘deal with things like that’ – but, maybe she was put on a list then.

Maybe someone started paying attention when she posted words written in Arabic. 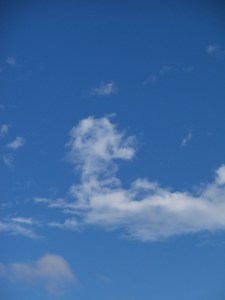 Remarkable, the extent that she had gone to, trying to communicate the possibility that had presented itself. Though not really, she hadn’t actually told many many people – had only sent out a handful of messages. It is true, she thought – watching the steam rise from the roof of the hospital, the clouds drift low in the eastern sky – it is almost impossible to convey anything accurately without telling too many secrets.

It is unlikely that anyone would be able to really understand without knowledge of all the recalled facets that have written her story.

She had felt, for many years, like a near-empty vessel and she understood that all the times she had gone seeking – all those long circular drives over a mountain and down into the desert, home through a gorge, all the walks around the blocks with a child on her back and a dog on a leash and the deep voice that rose out of her when she would sing to the children those made up words about walking across sands and kind and gracious hands, all of it…she understands, with that now familiar sudden feeling, that nearly ever bit of information she had bothered to store in her warehoused mind was available to her as a piece of the puzzle, of her story.

As she did the dishes from the night before, she thought about how much she liked her story, how dear to her all those small details have become…and how familiar they are, vibrant and present and virtual. How wonderful, to have such a vast collection of sights and sounds and scents.

She is a rememberer and it is her memory, her stories, that make her human.

She laughs to herself a lot and she did so again this morning, wondering if her stubbornness was simply a defense of the value of her memories and she thought about a story by Janet Frame that showed up in The New Yorker sometime earlier in the year. She can’t remember the name of the story, but she knows that it was a tangle of description and subjective value. A man sitting in his swampy tented shack of a home, eating oysters and marvelling at his priceless collection of moldering books. It was a bit of a sad story, but with the dignified resolution of his walking away after an expert informed him of the worthlessness of the books.

She thinks a lot. And it has occurred to her that, at nearly every crossroads, she has chosen against her instinct…mostly because she has always wanted friends, wanted her family to be proud…but, friends and pride are of of dubious value when the cost is oneself.

She boxed herself away for years.

Here’s a quote, that has been used before here, from Annie Dillard:

“No child on earth was ever meant to be ordinary, and you can see it in them, and they know it, too, but then the times get to them, and they wear out their brains learning what folks expect, and spend their strength trying to rise over those same folks.”

I, Faith Rachel Rhyne, am not trying to rise over anyone, it is not in my nature.

However, I will not push myself down for anyone.

And, if someone can prove to me that I am not proving God, well, I will be happy to settle for proving myself, to concede that perhaps what has been laid out is just an outline of a person who has begun to fill herself in.