Apparitions do seem to happen, just ask the guy in Green Bay. Oh, sorry! You can’t because it took the Catholics over a hundred and fifty years to recognize the account as being valid. How lame is that? Seriously. The Catholics are of no help at all, unless you are a Catholic. Even if you are, they wait until you’re dead so that you can’t weigh in on the meaning of what you saw.
If I recall the series of events correctly, Almighty and All Knowing forces came way before Catholicism. Who put the Catholics in charge of how people see evidence?

Oh yeah, the Catholics did.

(To give due credit, the working-people-Catholics are no joke when it comes to deeply reverent belief…that’s probably why it’s usually them who see the apparitions.)

Funny how that works.

Of course, these are just clouds – because I’m not a nun. Even if I were a nun, they would be just clouds because the content (what with all the old triangulations and odd imagery) doesn’t fare well with Catholicism’s broad-brush dismissal of all that is not devoutly Catholic…which effectively shuts the door on a whole lot of impossible clouds. 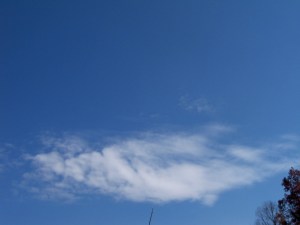 Well, having totally destroyed my chances of ever being canonized – I’m going to bed.

(No, haters…I don’t actually think I’m a saint. However, isn’t it interesting that the experiences which, historically, have led people to sainthood are now considered diagnosable under the rubric of the Diagnostic and Statistical Manual? I wonder when intellectual turns and awakenings of spirit came to be considered delusions?)

(Come to think of it, I suppose a lot of saints were, within the contexts of their cultures, considered to be crazy or otherwise worthy of denial. They are celebrated only after they’ve been burnt at the stake. What a shame that is.)

It is all so seriously ridiculous, isn’t it? Yes. Yes, it is.