I resisted commenting on Voznesensky’s green eyed tuner, a cat receiving signals like a Sphinx in his lap. It is interesting to me that animals held as holy by Egyptians would inspire poetry in 20th century Russians.

It is all so obvious to me, what is true and what is false…what is known and what’s been lost. 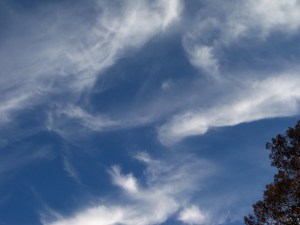 Frankly, I am a little baffled by the lack of modern scientific inquiry into this thing called ‘God’ by so many names. The sanctified walls of canons prevent us from thinking about the spiritual realms as anything real…they are reduced to words in books and hopes to be hoped in sacred places. The scientists and holy men sit with their backs to one another, both studying the sky.

I wasn’t even consciously interested in ‘God’ – I had, for the most part, written the whole concept off as the work of mad men manipulating hope. However, with all these parallels and thematic points of resonance, it is clear to me that there may be more to the stories than the stories tell.

This is really quite fascinating to me, this inspired critical analysis. It is satisfying to figure out the answers to my questions. The thing I really want though, the thing I have always wanted, is for the world to make sense. I am tired of looking down this road, knowing where it is likely to end. I’m trying to take my turn.

It seems reckless to me, to end, with a king, a story that people claim is endless. The most unfortunate thing about it all is the modern resistance to new understanding. Remember Galileo? We now accept that the universe does not spin around us, don’t we? That we are not the center of it all. The Catholics used to think we were.

Galileo went through a heliocentric hell as a result.

These are just clouds, and aren’t they lovely? If nothing else, should we not spend more time considering the free expanse? We are a vain and prideful species and it is those characteristics that destroy our hearts. That is why there will be no new understanding (pleasepleaseplease prove me wrong on that) – because proud and vain old men with rings will never allow their constructed thrones to be seen as what they are…chairs built by human hands to aid in the conquer of foreign lands. 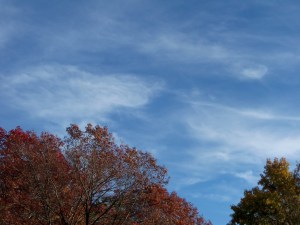 There is a ‘Y’ on the head of the horizontal cloud, a heart drifts in the distance.

This ship has been run aground by greedy fools at the helm. The people who could change the world, the visionary meek and beautifully brilliant losers, are ignored or scorned into entertainment fame as songwriters and abstract impressionists. It’s really a shame that, for all our good intentions, this game just goes on and on…death and debt muddy the floor, clutter the mantle like forgotten knickknacks. People go and they pray and they pray and they pray…the problem is that the people running this show don’t really give a damn about God.

By my estimation, they haven’t for thousands of years. True story.

In other news:
I realized, as I stood in the crowded elevator at the courthouse the other day
that the crush of winter-coated bodies (the elbows and shoulders and ears all up close)
was the only sustained (four slow floors) human contact I have had for months.