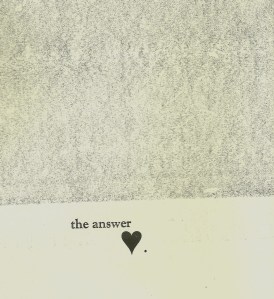 *It should be noted that this is written in a postmodern form of poetic (re)interpretation. If you read it and think of me and start to worry about my sanity…well, that just means you’re hyper-literal and have a poorly developed sense of story and sub-text and metaphor. I am an artist and a story-maker. Do you remember last year? I tried to tell you as much then…but, you insisted on reading me all wrong. Still, some people understood and they still understand and I write this for them.
We are not alone.

Someone told me that I ought to be writing ALL THIS down and, it is true, I should. I’ve gotten out of the habit of note-taking and this is unfortunate, as I actually have notes to take now.

Friends have come and gone and stayed but still gone…gonegonegone.

They are a mess. Then again, I suppose I have – at various points – been quite the pretty mess myself. I’m not a mess anymore. I figured out that the most troublesome parts of my self-ness were the attributes that had been crafted for me by other people. I was written all wrong. So, I took the best parts and the worst parts and I hung them all together in a story that is truly mine.

Sometimes we just have to consider the ways we tell our stories. Me, I have always told my story true – but, as we well know, truth is quite subjective. The very same person in the very same circumstances could easily be a victim or a triumph. I am not quite triumphant, but I am not a victim anymore. Realistically, I was so shut down for so long that, really, I was hardly even there when .all.that.bad.shit.happened.

…except for last year, I was there for that – fully present and:

However, I finally understand the word to the songs that I never really understood before…

‘when you have no one, no one can hurt you…’

See, I’ve always had someone…even if it is barely anyone, even if it was only my mom…and then, during a series of days in the Fall of 2010, I had no one…truly no one…I had disappeared in a very real way. Even my children couldn’t see me after all that had been done.

I came out of hiding and the reception was not kind. It almost killed me.

However, some certain lightness is gained when we are freed from the burdens of all that we have been told that we are.

There is heaven in the hell of having your ego destroyed.

Then, as I struggled to stay alive, I made a lot of new friends.

I choose my friends wisely now.

Always though, there is a soft spot in my new-old golden heart for all my long lost brothers. I have sisters, too…but, you know how it is with sisterhood…

Unless ego death has occurred, the sisters still see me through the eyes of men and in relation to themselves. For those women who have achieved true sisterhood, well they know the score and I don’t have to explain a single thing to them.

They run their own shows.

We learn from crossing paths and sharing brief appreciation for what we bring to the story.

The long-lost brothers are, by and large, shipwrecks on a foreign shore. Though not all of them, a lot of them are music makers and image takers, story writers and early-morning witnesses…

for better or for worse…

If I can hold their gaze for a few minutes, they return to themselves and all the brilliance of sailing with the wind at your back.

They remember, sometimes just a little, who they are.

Some of them end up drinking or dulling themselves to death to try to forget again and that, my friends, is unfortunate.