My Life is Pretty Normal

I think I’m going to begin making more conscientious note of songs that support grandiosity in the absurd hope and simple, beautiful fact that something really is happening. (something is always happening, everywhere…)

(Wouldn’t that be lovely? If everything started today. Guess what? It does. Every single day is today.)

Can you imagine what it might be like to hear a song such as that when one is awash in evidence that the world is full of magic and that somehow you figured it out and the sense that it really might be as huge as it feels?

…then to think about how all the songs that play really do seem to be telling a story, because that’s how radio play works nowadays…cataloged by genome and theme, style and nuance…spun by algorithm.  It’s not too hard to figure out.

“Is someone trying to tell me something?”

The thought is inevitable. It is a natural state of human inquiry, curiosity, amazement, experiments in belief…it is very human.

Sometime ago, probably years ago, driving through some desert, scanning the radio late at night, I realized how much I love the chance of song and how music understood what I needed to hear far more than any human ever had.

I am able to view these thematic correlations objectively…but these songs that play, they do inspire stories in the mind of a woman who has been daydreaming about the fate of the world for a very long time.  Fortunately, I’ve learned to keep the stories in balance with one another, the real, the hyperreal, the surreal, the dysreal, the supereal. 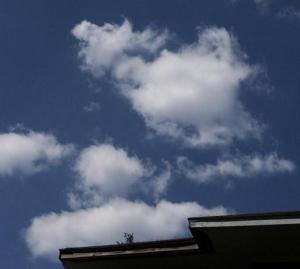 …and listening to the radio and studying clouds is more fun than reading the Bible.

Real Life Disclaimer: yes, I know…I have to go to work on Tuesday and tomorrow morning I will make oatmeal for children before sweeping the floor. Perhaps I will take them for a walk and talk to them about how I am going back to school in the winter. Oh, what am I studying? Narrative process in transformative paradigms, maybe something about madness. My children understand that madness exists. They almost lost their mother to madness…

I know they have some sort of carnival planned for tomorrow that has something to do with a ladder and a water hose. That should be fun.

We’ll probably give the dog a bath.

My life is pretty normal.

One thought on “My Life is Pretty Normal”