Prompts and the Tragedy of Time 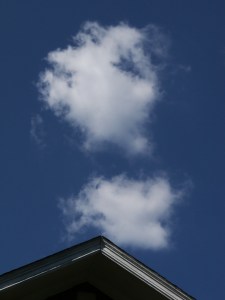 This should have, would have, could have query is funny to me. The little prompts that wordpress has offered up lately seem to be urging me to tell something. Of course, that is only the meaning that I give them, the sense I make of these nudges to speak about the surreal, the name I chose, what I wish I might have done.

I should have posted this in response to the question, What’s the most surreal experience you’ve ever had?

In the spring of 2010, in the midst of recovering from the grief of a lost friend, I found myself watching the clouds a lot. I wrote on my blog, “The thing I love most about clouds is that they are never the same twice.”

The thought of that filled me with a sense of magic and impermanence, the sacred whimsy of wind current and fleeting accumulation that couldn’t possibly replicate itself.

Then I started noticing something that struck me as a little odd – shapes, forms that were repeating. Swoops and angles. There was something like a w in the sky, like a child’s drawing of a bird, but upside down, scattered flocks of this shape, day after day.

“Hmmm,” I thought, “that’s weird.” I pointed it out to people, but they didn’t seem to think much of it. 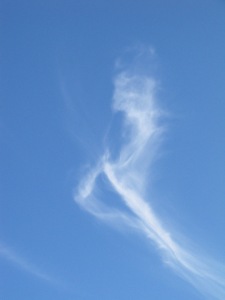 I started paying closer attention and saw that I had been wrong. I saw more shapes that were the same, loops that looked like infinity, branches like the letter Y.

I began to get obsessed. I started to see, with clarity, that the sky was full of pictures and that they did repeat, the same geometries playing out day after day in the details, shifting and drifting, taking the form of faces and eyes if I watched long enough.

The sky, it suddenly occurred to me, is alive.

As I watched, I was aware that, really, not many people looked up. They didn’t, I thought, see the sky in the way that I was seeing it. To them it must look flat, meaningless.

I wondered if I was seeing the sky as people might have seen the sky a long time ago, before television and long lines of traffic, when there were only stories and thunderstorms to entertain us.

I took pictures, thousands of them. Somehow, the clicking of my camera, my open-heart attention and appreciation, seemed to pull new forms from the drifts of cirrus and cumulus and I’d gasp aloud at times, over the shapes that came forth.

I felt like the sky was happy that I was noticing the ways that it does stay the same, the ways it does repeat. I realized, with a feeling in my bones, that the ways that it changes repeat, over and over again, across time. Suddenly, I saw that this little bit of time I call my life was being lived out under a canopy of current and light that had existed since the beginning of time, our visible edge of the universe itself.

That changed the way I thought about everything.

The most surreal thing I ever saw was God, drawing pictures in the sky. 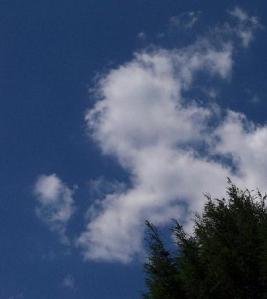 That is what I should have posted, but I didn’t have time to. The next day, pulling into the parking lot at work, I saw that the daily prompt was an inquiry about our chosen blog name.

As I walked into the office, I smiled a little. It’s really fairly self-explanatory, but I wanted to write about it…about what is proof and what is tragedy.

I didn’t have time.

So, today, with ‘should have, would have, could have’  there are so many things that I might have done, or may have said.

Life is an endless series of exchanges. Some deals are missed, while others are sweet or raw.

Sometimes we just don’t have time to say all the beautiful things we want to say, to do the fine things that we imagine ourselves capable of doing.

That is the tragedy. 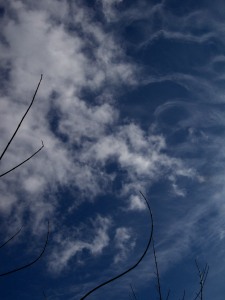 6 thoughts on “Prompts and the Tragedy of Time”