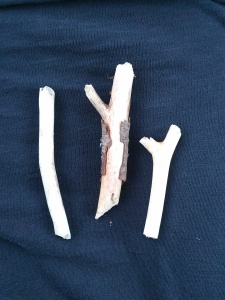 March 2 (13 days ago)
I don’t much feel like writing at the moment, but yet I have things I’d like to remember…like that the best part of my day was texting with my daughter about the big-smile emoji having an epiglottis, which seems like an odd detail for an emoji to have, a brown-hued epiglottis at the back of its throat, to prevent it from asphyxiating while eating and drinking. Makes it seem more human somehow, knowing that it has an epiglottis, suggesting a windpipe and an esophagus, inner workings.
Part of why I enjoyed that small segment of my day is because it was a nice and mildly interesting distraction from the rest of my day, which was not a bad day or something I’d like to forget, but which was long and complicated.
In doing the work that I do, I am constantly attuning to other people, engaging with the details of their lives and communications. The subtle shifts, the openness and barriers. What the person is saying and how it makes them feel. “I saw that…even talking about it made you anxious…”
I put my own hand on my chest, and take a deep breath myself, breathe with the person a minute. “That slow exhale is what calms a person down, activates the parasympathetic nervous system.”
We are talking about cleaning the house. I have just shared that yesterday I finally got the damn lights off the Christmas tree, which is still out on the porch.
It is part of my occupational role to selectively and conscientiously share aspects of my personal experiences in “recovery” for the purpose of establishing “therapeutic mutuality”…and, you know, so that I am being a real human being.
I take out my phone, show the person a picture of my oven, the dirty space underneath the burner trays. I photographed it because it occurred to me that it may as well be an abstract composition.

It was still sort of disgusting to me, no matter how much I tried to see it as art.
This afternoon, I talked with another person about household management in terms of entropy and inertia…”It helps me to have more compassion for myself if I think about the situation as being the product of natural forces and tendencies. Everything goes to chaos, and if the mechanisms of tending to entropy are stuck in inertia, then things pile up.”
It’s not so bad for me as it is for a lot of folks, the entropy and inertia, but I definitely recognize a pivotal point in my life’s trajectory at which my ability to proactively tend to the baskets of clean laundry and the piles of old wood somewhat went kerflooey and, for a time, all but the most basic household maintenance tasks were utterly unmanageable.
I used to replace plumbing, even installed a toilet once, when the kids were in preschool. I would dig up entire swathes of lawn, transform the space into a garden. I did this at three houses in three different states over the span of three years.  I was pregnant when I started my first garden, and I had two children under the age of three by the time I had excavated the green front yard and turned it into a vegetable garden. Now, there is no sun for vegetables, the hedges have gotten tall as trees and an acacia has sprung up outside the fence. The volunteer maple from several years back is taller than the roof.
It will probably tear up the plumbing, is what I have been told.
Last Spring, I aimed to climb it and cut it down, bit by bit, but I didn’t make it far. So, it is still here, bigger than it was.
I’m glad I didn’t get on disability, because at the time I would have applied, I probably would have gotten it, because of my unfortunately lengthy mental health history and diagnosis…and the fact that I was, at that time, kind of a wreck, with a baggy sweater and a blank, anesthetized look on my face and a kitchen that smelled like chemical pine and apple pie to try to impress the home visit worker.

Like, “Hey, I’m totally fine! I mopped my floor and made a pie. All good here.”

At the time, my only friends were a pen pal on Death Row and a few loose acquaintances, women from my kids’ school – other mothers who I couldn’t connect with, because my life was a wreck and my own kids were at their father’s.

Working was hard. Exhausting. Utterly grueling, just the being awake and saying things and driving and being a real person out in the world. I cried…on the way to work, at work, after work. 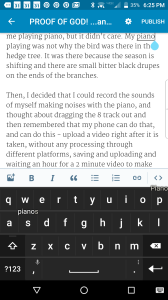 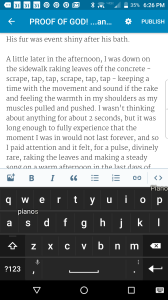