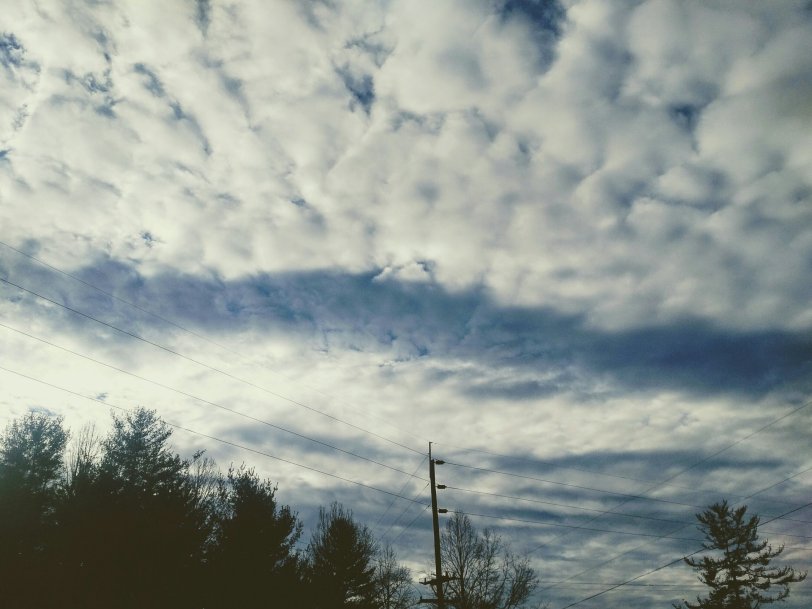 The sky had a seam

early in the morning last Thursday

The color of soot smoke

with the confidence of a Floridian

I stopped and took a picture

kept pointing it out,

“Look at that line in the sky,” leaning down

watching the wound in the sky

move as we moved, overhead

and then behind the pines

heading down the road

toward to guts of the county

where we’d gun up a hill

where the man who had a beard like Zeus

before he died alone,

unattended was what the paper said.

He had a beautiful view.

The flatlander exclaimed, looking out over

Of the homes down below

All day I watched the sky

Watched the line get wider and wide

Stretch itself thin and grey

Weave itself into the white

By the afternoon, the seam had spread,

To fan the sky clear out to the airport

Full up with snow

In the night there was a trumpet solo

For a boy who loved the color orange

And all the people stood to clap

To whoop and holler

and for those notes rising clear

Up into the balcony

Where I sat in a hard wooden chair

Thinking about seams in the sky

The next morning, the ground was wet

No snow in the dark as she sat outside

And thought, “today is the day! I will laugh today!”

By daylight there was an inch of damp powder

on the ground, everywhere,

swirling over the pavement, quieting the forest

and she marveled as she drove into a pale sunrise

At how quickly the world can change

But she was still surprised when she drove home

Alone, still in the daylight

Snow crusting the roads, making everything

She did not laugh as much as she thought she’d laugh, but she remembered that everything changes, and so it was okay to not laugh so much, to only laugh a little under that heavy, frozen sky.

Tonight, it is windy, and there are scattered crashes all across the neighborhood, limbs breaking, things blowing off of porches. Something scrapes down by the street, on the side of the house. Garbage and trees.

She could feel the wind hitting the car on the interstate, driving home in the dark. She tried to see the silhouettes of trees, to catch their movement against the black dark sky.  Almost a new moon, heavy cold cloud cover.

That morning, she wondered why she hadn’t written, not in days.

This evening, she feels tired.

…but, she still remembers the painting she wants to paint, the one she saw this morning in her head, under blue skies.

She remembers, also, the idea she had…the very good idea.