Though I actually haven’t drawn yet today and the day is nearing done, here is a drawing that I did probably around the same time of year about 9 years ago. I was pregnant with Leo and crazily into skeletal structures. I had just finished working at the library and was just waiting for the kid to be born. I painted a horse’s skull (I have an actual horse’s skull that I used as a model, from the horse skeleton I found in the woods down in Georgia) a crow’s skull (modeled from a book) and the tour de-force of my prenatal study of animal architecture was to be the whale skull that hung in the Biology building at Portland State University.

So big as to not even seem real. It was hot and my brother, visiting, and I drove down to PSU so I could take pictures of the whale skull. I think I only had a polaroid. There was something weird about it. Maybe it was hot and I was pregnant and my brother smells weird and we were just hanging out in the Biology building taking polaroids of bones…or rather, I was. My brother was sorta just waiting for me to be finished. I had to hurry and do this sketch. Noting the 3-D features of the actual and massive structure. Words like: 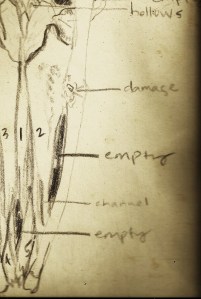 I was going to paint it on the big piece of plywood that I painted the two ships+ribbons+hands onto a couple months later. Actually, when I sized up the skull in a sketch on the plywood I realized that without the enormity of the actual thing, it was really just a vague skeletal and yet vaginal shape. So, I painted boats instead.

And then I hardly painted a damn thing for almost eight years. It happens. Takes a lot of creative energy to maintain appearances. Ordinary Faith is a work of art that is dull and neurotic and anguished and uncertain and difficult to work with and conceptually flawed in obvious ways. I like Honest Faith better. Fewer kudos, far more fun. A good call in the long run as evidenced by my children and I laughing together a bit more often.

There is nothing as conceptually pure as silly giggling. It is something I have been lacking. Though, I am getting good at laughing by myself, at the antics of fireflies or a strange tangle of thread, an errant line that turns one thing into another.

(This photo was Auto Adjusted by Windows, no other changes.)

The golden haze to the North/Northeast is definitely a bit…um, golden?

Dust. Drought. Pollution from Tennessee. Oh, I just noticed that the rainbow appears to be coming down through another of those odd circular cloud forms. Maybe it is god after all. Eh.

I am less suspicious of god than I am of people who believe in god. I hereby do not allow any religious organization to turn my consolations into miracles. Though they may somehow be.

They will be spoken of only in a factual manner and if someone would like to quietly believe that is was god who sent me a friend in a skink…well, go ahead.

Know that no beauty of mine, no truth of mine will ever be used to promote any agenda other than simple goodness and maximizing the awe-some-ness of the days.

People will believe what they want. Stupid to put names on things that don’t need a name other than “Wow.”

I am still working on figuring out the warm and rising certainty that has been kept me smiling quietly to myself most of the day.

give the illusion of movement

Too many photos sent to myself.

However, at the end of the day…

at least I have evidence.

of what? I dunno. That I take a lot of pictures with my phone.

I started a silver metallic thundercloud heart. The dark metallic form will be at the core of the thread cloud. Um, yeah…clouds seem thematic.

I have spent a lot of time looking at skies.

They are never the same twice. Ever. The identical sky is an impossibility.

Seems to me that the universal simulacrum issue has caused me to forget to apply for jobs today. And now it’s 12:12 am. Tomorrow. Rats. Listening to the Smiths on Pandora, and all kinds of other old alt-pop…

man, the lyrics of pop songs put this blog to shame as far as self-absorbed melancholia…seriously. That’s why I need to go play banjo.

Um, I mean…apply for jobs. Yes. That is just what I am doing.

Soon: Updates on Specialty Urban Agriculture Schemes, i.e. growing culinary-grade mushrooms and red-twig dogwoods and double-blooming lilies and white hibiscus and obscure mint. I should grow my own damn tobacco, as well. Shipman’s idea. Not an awful one. Buying tobacco, even for handrolled smokes seems pretty ridiculous given the circumstances. That is addiction, we do things with no sense and the thing is a salvation in itself. A little game we play with ourselves of denial and guilty reward.

Lots of good songs have been noted lately. Old, new, analog and digital….

Here is a combination of all of those things. The last song Pandora streamed to me this evening. It’s alright. If you’re into that sorta thing. The video is charmingly straight-faced and the people who made it for their college course probably are not involved in a creative field. However, it’s sort of sweet that they were probably all stoked about the sepia tone and the footprints in the sand. I don’t know. Is this what happy looks like?

I think it looks sandy. I don’t like sand very much.

I wonder, where do we all end up?