Well, my plans to train myself to stay up late are going just swimmingly. Not being so dreadfully under pressure helps IMMENSELY. Of course, there IS a great deal of new pressure that has supplanted the old exhausting pressure.

I am writing a lot – as you must imagine. Most of it self-absorbed drivel, but I try to make the syntax interesting and also introduce new vocabulary for old, tired feelings. And I say drivel for the sake of token self-deprecation. I get the irony of focusing on myself so that I can realize how small I am.

My head is filled with weights and measures. I need to flat-out learn metric. I probably know it – a casual absorption of knowledge that I rarely use. Not because I am anti-metric, but because I rarely actually measure anything with the finality of a ruler, a tape, or a scale.

AND How to Fix Your Turntable for a Buck…a silver dollar. Hope to add them later today…depends on whether or not the pile of green biomass moves itself. 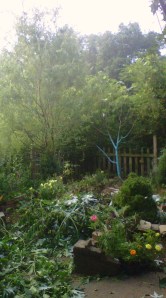 I stayed up ’til 3-ish. But, I don’t feel too weary. Actually more awake than I did when I slept all the damn time…when was that – a couple months ago. Pre-Simulacra and Summer Vacation.

I ever was; I am happier.

Perhaps I will loose my hold on these hard socially ascetic lines I have drawn lately.

I am going to, maybe, post these ‘how-to’s’ as instructables.com 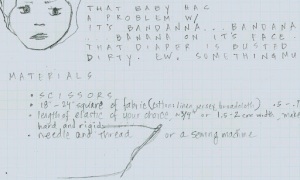 I love that a worn out blue bear made

in china
and a cousin to all bears

that are sentenced to hang at state fairs

I love that this bear
was a gift to my son

he was and is quite remarkably blue

(And that lady, she smoked)
(And they called her Monk and she loved with a face straight and honest)
(And I never felt out of place with her)

In spite of
or
Especially
Because

they were not cute in a smooth-haired way

And the bear was forgotten and

found by the girl and she loved it

though it wasn’t hers and

…it was okay because the boy: he never cared much for the bear, never saw the depth in the hard plastic eyes

The bear wasn’t meant for him…

to the girl he was a first friend, and she called him DaaDoo’s and her mother loves him, too – – –

This is how DaaDoo’s will be more than he was ever intended to be. More than a toxic blue bear.

“They got bins of ’em over at the Dollar Store. I got a closet full of ’em -” Monk told me, on Preschool Graduation Night when I thanked her for the blue bear…

a little tearfully for giving my kid a half-fighting chance each tearful and screaming and strangestrange morning. 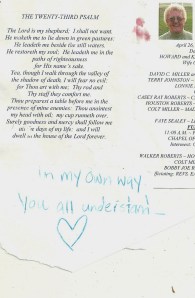 The boy gave his old skateboard to his sister just this morning.

Small grace find us, after all.
Yay!.