Notes on the 16th, published on the 17th

I think people should be cautious in their reactions to these photos. They have been adjusted for exposure values (brightness and contrast) and there may be any number of excellent and reasonable explanations, e.g. the HVAC system of the St. Joseph’s campus of Mission has created a micro-greenhouse over Beaucatcher Mountain.

Well, I seem to be out-producing myself again…of course, digital photos are awful easy to produce.

Look at the nice wave forms along the top slope of this, um…cloud.

I was actually fairly bummed to see that the clouds were active this afternoon. Extremely bummed, actually. They ended up being pretty remarkable, but I had really just been looking forward to drawing on the porch with no thought of storied clouds or portent skies. 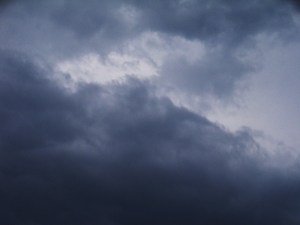 Clouds as peculiar as these really ought to be documented, just for the sake of posterity. I am fairly sure that lattice-work/checkerboard is a rare way for clouds to accumulate. And so, no calm drawing on the porch tonight. Rather a bunch of photos and a hasty drawing that I was dismayed to find contained CLOUDS. Urgh.

So, I did go ahead and inform a couple of UFO blogs re: the clouds. Haven’t heard back yet. Do these folks not know bogus cloud cover when they see it? 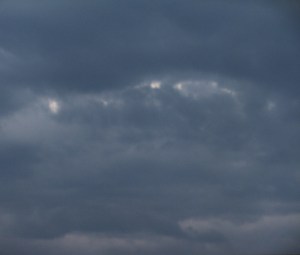 A) a unifying natural force that binds to the molecular structure of cloud particulates to convey 1/2 coherent meaning, or at least the intent to convey…something. (This could be a real tourist draw, couldn’t it? I personally would not go out of my way to see symbolic repetitive cloud forms, but someone might…maybe lots of people. Buncombe County: Where ANYTHING is Possible.) (New county slogan proposal?)

B) Jehovah – but, it’s unlikely and I will explain why as soon as I have wrapped my brain around the concept.

(Could some person learned in comparative religion please intuit what I need to explain and say it in a way that people might understand? Great. Thanks.)

C) a ghost ship that was released from the depths of the Gulf of Mexico to drift north until it became caught in the bowl that is the central Asheville sky.

D) A build-up of static cellular signals over downtown Asheville.

Aside from the esoterics of cloud universality, I have been cleaning up the labels here.

I wish the clouds were a bit less redundant.

Well, it helped me feel a little better about it all. Really, it is so clearly the work of a woman earnestly trying to find her way around the way she’s been written and how she reads herself…

I have left in all the false starts and toxic bridge burnings, because they have been vital to the process.

Today I found The Icarus Project and through the vast amount of information and support available (really you ought to look at it…amazing…I wish it had existed 20 years ago. Better now than never…

Via this VERY IMPORTANT PROJECT – I was able to further galvanize my commitment to being honest with myself about the parts of my story involving the Psychiatric Machine…not because I want to revel in the misery of misunderstanding – but, because there are innumerous people out there that are grappling with murky diagnoses and mis-medication.

I feel like my story is important because I am still intact enough to tell it. In bits and pieces now, but a lot is being recalled and considered. It is such a long story and it is not just mine…

The Icarus Project offers a huge amount of support and encouragement to people traditionally perceived as mentally ill in some way.

I certainly fall into this category. However, I have been fortunate enough to have capital in the form of familial attempts at support and a general commitment on their behalf to keep me on the planet, a brain that works hard on my behalf to find things of interest and salvation, a heart that really doesn’t know how to stay mad, a college education, creative skill, and a bone structure and stature that is deemed appropriately attractive – 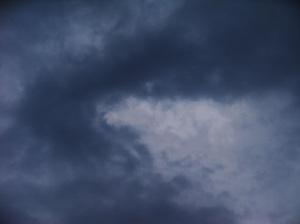 The thing is – I was talking to a woman I know via my volunteer work and we ended up on the MH subject.

A lot of the kids that are in “The System” – the vast majority actually – receive some mental health case management.

There are 5 year-olds in foster care being given risperidone.

A chemical that can cause pituitary tumors.

What capital will serve as a safety net for these kids? How will their brains and their minds and their hearts ever survive the Psychiatric Machine.

The human heart is tough. However, when you tamper with the chemistry of developing brains, you are tampering – without right – with that child’s unknown potential.

I really hope that – in some way – I can use all the awful things I learned about mental health in a way that helps to elicit a proactive dialogue among stakeholders in this community’s mental health. 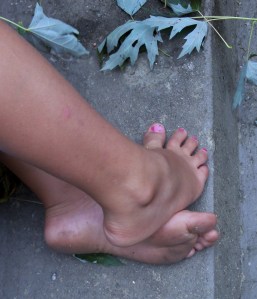 Kids her age. Kids she goes to school with.

I don’t think it is okay for children to be given drugs like risperidone.

I don’t think it is okay at all.

I think it is even worse for a child in foster care to be given such compounds. Because these children are vulnerable to the adults that are paid to care for them, they must comply with medication or possibly face consequences that will further damage the child’s stability and self-concept.

I can’t think about this anymore. I have too much happening in my mind right now. Way too much. I have told myself that I am going to finally layout my sampler. It will be easy once I start. I have to time my beginnings well, because I would really like to be able to actually manifest something that is genuinely reflective of my effort to be maximally awesome…in my own estimation.

I am excited about possibilities and was relieved to discover that I am still deeply inspired to activate and advocate for causes that I believe are truly vital to the health of species and community.

I think it’s all going to be okay.

Really. It’s all going to be okay.

The sky is full of all sorts of oddities.
Best unexpected-bagpipe song ever, by the way.

When I lived in Portland, the (baffling) Scottish Rite temple was around the corner from my apartment and some Friday nights there would be a procession of kilted men playing bagpipes in the early dark grey.