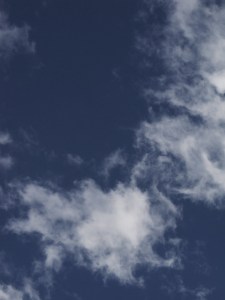 Well, waking up this morning was so much like waking up on so many other days…every day seems like a damn crossroads. And it occurred to me that this blog, this ‘project’ – – – it is just like so many of my other efforts. Putting my foot forward…and instead of finding something solid, there is only air.

And not one person steps forward to pull me back, they just watch as I fall…or they push me over the edge.

My family would think, if I were to kill this blog, “Yay. She’s finally listening to us.”

I’m not. I am just sick of being something that is witnessed, but never seen…or spoken with, simply spoken about.

Not one person (other than the nice person who sent me the link about Nat’l Geographic’s noting of new cloud forms and a social worker that I worked with as a GAL for a few years) has extended a hand or kind inquiry. Not one person has called. My friend from the Farmer’s Market calls sometimes, but – to be honest – it is another instance of someone liking me because of how I appear to them. He has written me as some wounded girl who needs saving, making suggestions that perhaps I have a sordid drug addiction somewhere in my past.

Which is not true…mostly all I have in my past is a bunch of jerks who treated me like some sort of commodity, to be enjoyed and then disposed of when I showed evidence of being an actual human being with and actual heart.

It blows my mind that, of all the people I have known in this community, not one (other than the nice social worker) has inquired about me…it’s like I have just disappeared. Strange, that if I were to have a physical ‘illness’ – well, my porch would be piled with casseroles and there would be company and it would all be so damn uplifting.

Instead, I have been presented as having some vague ‘mental illness’ – and nobody will cross my doorstep. The sad thing is that I am not even sick. Just sad and frustrated that it seems my voice counts for nothing, regardless of reason…and all the ugly things that people have imagined to be true about me, all the things I have forgiven and forgiven and forgiven…well, it seems that bygones will not be allowed to be bygone. In fact, it seems that this won’t end until I am gone.

Except I can’t go, because my children deserve (in some appreciable capacity) their mother …who they can’t even have because of some shit that never should have happened…just a stupid series of events that, fueled by fear, set me afire.

I think I will go back to writing about washing the porch, or filing for my permit to keep chickens – since one of my neighbors called in a complaint that they were ‘at large’ like rabid dogs. I was supposed to file that permit months ago, I just never got around to it. Maybe I will do a series of essays about trying to construct some experimental aviary for wayward poultry.

I don’t think I will write about anything bigger than me any more. It is remarkable, how hellish my ‘real’ life has been since I started to believe in Good Old God. I have felt remarkably hopeful, but it seems that…well, what’s the point?

Makes no sense and, yet, to tell myself that there are mysterious ways at work and that perhaps there is some bigger purpose that requires the illogical removal of my little family, well – that seems to be a bit grand, in my mind.

I am really nothing special.

I might still take pictures of clouds, because I enjoy it. I don’t know if I will share them anymore. Maybe not unless someone asks. I might work on finishing the painting I started months ago. Try to work on the impossible Christmas scarves, already uneven at the edges. Draw. Play music and write disclaimers about any improv lyrics that the most callous skeptics in my life might use against me. Get a job.

And just keep waiting for my place to find me, because I am not looking anymore…every place I seem to think I belong seems to be all wrong. I might go play banjo and read from Emily Post’s Book of Etiquette at some open mic, maybe go to see some band play in some basement…or maybe I’ll just stay here.

I don’t, as I have stated before, know what to do.

Here are some of the pictures from yesterday, the last clouds I will post in the foreseeable future…then again, who knows?

Like I said – everyday is like a crossroads. I just want something to hold me in place.

The detail in what I see as the iris of a kind and concerned eye, well – it is truly remarkable. 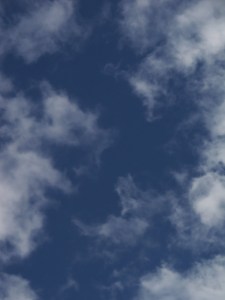 By the way, I never found my missing hedgehog, Hildie.
She, also, seems to have simply disappeared. 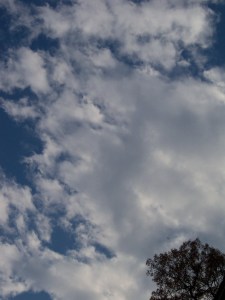 This is the song that I have my best solo dance parties to…even when I don’t know what to do,
I never get bored.