A brief essay about money and chemtrails

I hate money. I really do. It is because of money and material wealth that the world turns the
way it does…sour and bitter and in endless competition and depletion and acquisition.

I hate money. The exchanges made by humans have no real value. Worth is made arbitrary by

those who have, somehow, seized The Right to Define Worth.

When the fascist systems of the Cultures of Economy pervade even our smallest of exchanges,

when the drink we purchase purports to tell us something of our character and nature…when we are
defined by the externally produced products and ideas of Systems of Power and Profit…we have our
Right to Define usurped.

When we are told that we must indulge in commodified lifestyles in order to function – nay, survive –

within society, we have had The Right to Define imposed upon us. We have been rigorously taught that
Value is not set by The People, but by the Systems.

“What is she talking about?”

This is what I am talking about:

Everything that our fleeting walking and talking life is comprised of is determined by people external to us.

People that are not even people, but people that are corporations and institutions.
Are the laws re: Churches anything like Citizens United? Like Corporate Personhood?

As far as chemtrails are concerned…I notice the way the clouds are born as lines sometimes, how

the contrails grow instead fade, as they did when I was a kid. They take on a particular mass.
I am not sure if this is the result of cloud seeding or chemtrails. I just know that the clouds are strange.

Then again, the clouds are always strange to me. Hmmm, I remember when it first seemed like I

could draw with clouds. When I would think of some singular something, usually more a feeling than an
object or image…a big feeling…and then I could watch as some holy spectacle unfolded in the sky.
I wondered if it was telekinesis of some sort.

There is a definite feeling involved. That’s when I first began to suspect that I may be finally

actually losing my mind.
As I have since realized, there is nothing crazy about any of it.
It is simple science. Laws of attraction. It serves a purpose of some sort, I would imagine…or may
be sheer folly, my little magnetic brain cueing in to whatever heavy metal they’re dumping into the sky…
to slowly slowly fall, carried down by rain.

That’s the simple explanation. Cold artistic process based on scientific principles of physics and biology.

It does not, however, explain the feeling. The feeling is huge. It is the BIGGEST feeling in the

history of feelings. It is AWE and it is LOVE and it is so far removed from the angry little worlds of
money…it makes them seem trifling…laughable even.

This is not our world.

The sky has seen it all, my friends.

Ever since the beginning…whenever that was…

By the way, I do understand that from the perspective of the Patriarchal 20th Century Western Man,

this all sounds insane.

“She lives in a make-believe world.”

Whatever. We all do.

…And so here I am again, having witnessed yet another remarkable fit of clouds this afternoon, in the
midst of writing the initial installment of this email actually. I was all, “I hate money blahblahblah…oh.
Look at that cloud.”
It was just a suggestion of a particular linguistic geometry. A letter. Fuzzy but with right angles and
delineation of density intact.

This afternoon, driving home from work, I thought about this issue of cloudcalling. How it is so

farfarfar out of left field for the vast majority of the population…and all the perfectly wretched things
that people might make of it.

I mean, I would think that cloudwatching would be a good thing to do as a hobby? Calling stories out

of the clouds, discerning them.
It’s free and promotes positive insights about beauty, grace, and timelessness. It doesn’t bother anyone.
Why am I always defending myself? I do that a lot. On the one hand, it’s projecting and negatively
anticipatory…
on the other hand, it is perfectly reasonable, as I have seen the deleterious effects of willfull misreading
live and in person and I’ll tell you…it can get pretty dicey.

Also, I find it very important that I near-constantly remind myself that the vast majority

Perhaps not though…there are an awful lot of stories about the sky.

The telekinesis theory is bunk. It is the least likely. It doesn’t even make sense.

There are also theories about elaborate cloudform orchestration devices that allow

Secret Societies to project images in cloudform, albeit messily?

For the purpose of playing a Mean Joke on a naïve sub/genius with a daft heart?

Yeah, probably not likely – though it is an entertaining conjecture.

Just some weird thing the sky does sometimes and some

people are prone to notice more than others?

Yes, that is entirely possible.

Anyway, it is entirely harmless in this format. Just something to keep me threaded to the wild blue yonder. 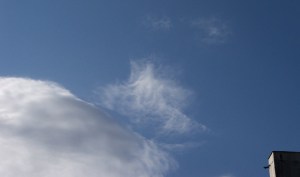 There is a story here.

I took these pictures this afternoon, while I threw the ball for the dog and thought about you.*
It’s a long story, isn’t it?
*this is how referential delusions are born. :)
Chances are good I am not referring to ‘you’ – because I don’t think the ‘you’ that I was considering today actually ever even reads this thing.
Oh, by the way, the dark spot on a couple of pictures is just part of having a lousy camera.
Such is life…