“I’ve been thinking about suicide lately…”

I have posted my latest scattered effort to process my feelings about suicide below.

Understanding how I feel about suicide is – for me – a life requirement…and a job requirement.

I will have to talk with suicidal people tomorrow.

Yesterday I was keenly aware of how tired I am of people wanting to die. 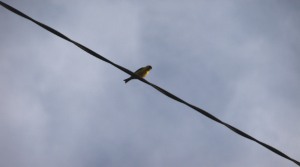 “Suicide has been on my mind lately. Wait. Hold the phone. That’s not what I’m saying.”

Every time one of my friends says that they want to die, I want to stop listening.

I feel angry. They don’t know what they are saying.

I tell myself to just hear what they are saying, to be present with them in their pain, to just hold their hand as their voices say, over and over again, the very same words I’ve said to myself.

The very same words that I said to my mother, right before I yelled, hanging up the phone, “You don’t have to fix it! Nobody has to fix it! I just need you to listen!”

Lately, just like her, I don’t want to listen. I want the pain to go away.

I want it to leave my friends alone.

It makes me angry, because it wrecks beautiful people, this pain.

For years, I have had suicidal people in my life. More than a few have died. I think that, for some people, my being in their lives really did help them to stay alive, because I was able to listen…but, also because I was able to help them believe something about life that they didn’t believe before…and I’m still not sure how this happens, how hope is renewed, but it has something to do with love.

Ultimately, we all save ourselves, but sometimes a friend’s kindness and acceptance can be enough to believe in until we can believe in ourselves.

Suicidality has been so hard to accept lately.

Suicide is triggering to me.

It is to a lot of people…and I’m sorry for that, because it means that people will not think about it and will not talk about it.

Worst of all, they will not listen.

My great-grandfather committed suicide.
At least a couple of times a year, a kid from the highschool I dropped out of committed suicide…and the school would have a strange quiet, until lunchtime, at which point “it” would be forgotten and everything would go along with the same clattering and hurrying and hollering way.

Very rarely do I use the word “hate.”

No good comes of it.

I never said my heart was perfect.

I have a feeling that, having written all this out, I will be more able to set aside my anger and to set aside my resistance and my willfulness in regard to other people’s pain and my wish that it would go away and that I will be able to be present in heart again…and that is all I need to do, and all I can do.

It is not always easy to want to live.

It seems like some good can come about from suicidality, from wishing that one could or would die.

In healing from those experiences, which are genuinely traumatic, we can find out what we want to live for, what is important to us and, in many cases, what we need to do and who we need to be in order to find the other side of suicide…which is not just staying alive, but wanting to live.
(..these are just notes for what might sometime become an essay of some sort…I experiment with truths here…to determine what I can and cannot walk around with in my head and heart.) 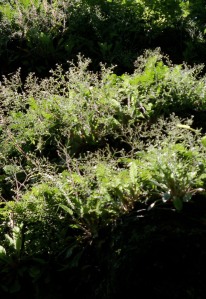 Yesterday, we walked to the top of a mountain.

There, we found a field of cows calmly grazing with the radio towers in the background.

Up the trail, my boy said that there would probably be good clouds to take pictures of, but the sky was a little hazy and bright. I think it’s very sweet that, lately, the kids seem to appreciate that I take pictures of clouds. Finally, it is just something that their mother does because she finds it interesting.

I laughed at the small dog instead of staring at the sky, the way that he ran looking for his ball in the grasses with a hundred miles spread out below.  The boy and I just laughed and laughed at the way the dog’s tail seemed to go in circles as he ran, like a windup toy on the top of a mountain.

There is a woman staying in my house who had some rough times in California and who is phobic of bedbugs, just like the last woman who stayed in my house.

Sitting in the backyard, two women in folding metal chairs beside a scraggly mid-summer garden, we talked about teenage bank robbery and incarceration, dropping out of highschool, and having a purpose.

“I have a theory about the origin of all written language.”

Somehow, seeing these balloons tied to the banister of this little church where I had never seen anything happening or anybody going in or out made me feel incredibly happy to be alive.

The Daily Prompt today, after a week that featured nomadism, parties, surveillance and changing minds, inquired of our most popular posts. I know what mine have been:  mental health theory and politics pieces that had brief flurries on facebook and twitter, a couple things that a friend of mine reblogged on her popular site…and that is all and that is okay.

I do not want to be a mental health blogger. I do not want to write for my readers, only the imagined ones…the ones who might find this and see it for what it is…which is just a space where I can be honest about what’s on my mind…a place to leave myself notes…almost like a journal, and who’d want to read that…and yet not really a journal, because it has been public for a long time, with some very far-reaching campaigns of thought and intent.

As I have said before, it’s a big experiment in what happens when a person starts to pay attention and begins to take notes.

I think that, right around this time four years ago I started this project.

My whole life has changed…and is changing still.

I have been drawing a lot lately.

I am almost finished with the draft design for a friend and in the process I have remembered how good it feels to draw a really fine line.

3 thoughts on ““I’ve been thinking about suicide lately…””