Today with a sampling of yesterday, some omissions 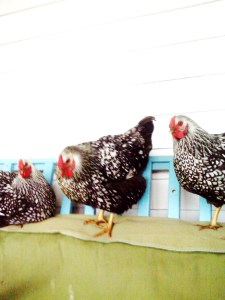 Subject: Dogs
I just woke up from the worst nap in the history of naps.

Morning was grainy eyed and leaden footed – sore in shoulder and hand. Spine. Legs. Everything was sore.

Not as young as I was. My older friends and coworkers are probably scoffing at the thought of me sore – oh! How can I – at age almost 34 – know anything about feeling sore?

I must’ve been sleeping like a rock. Tangled in blankets. I felt like I had just hatched.

I called the big boss at 6:38 am, intending a vague claim of sickness. However, only half-realizing it, my honesty explained. “I’m just exhausted, my head, everything is just so tired.” or something along those lines. Ridiculous, to feel so tired and honest so late in the morning.

(Yes, 6:38 am is late around here, Monday – Friday. I should be 1/2 through the morning’s gauntlets by then…not sitting on the stairs, thinking about how inconceivable it was that I should be expected to teach Physics in a Baggie at 10am. I hadn’t even made school snacks yet! My whole body hurt. Not terribly, but in the dull achy way that comes from being still way too long.) 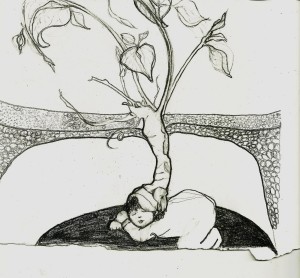 (Usually, I am way over feeling tired and honest by 6:38am. I usually shake that heavy lidded humility by cup of coffee #2 at about 5:30 am. This morning, however, I was too tired to care much about cup of coffee #2 and dozed in 10 minute increments on the couch, until 6:15 or so. Horrible ‘Antelope’ alarm tone from phone/emailer. Must change that soon. Or stop napping. It is entirely possible that napping and the inclination to nap is diminishing my quality of life.)

Fed the dogs. Ach. Dog. Missing girl dog badly today. Yesterday. Grief’s subtle long-haul. Yesterday in the field, sketching the interior of the fabulously-named-and-yet- not-very-interesting Ranunculus and keeping a solid eye and vocal command on Under. (vocal command = every five or so seconds I glance up from the drawing and make a little left side of the mouth clicking call to make sure that Under is still sitting right there, four feet away from me in the grass. If he gets up, I stern-hiss-call him back to his haunches. He doesn’t seem to be having much fun. But, he seems to understand that this is what he has to do with me right now. Just sit there. He is a very special dog himself. I should give him a bath tonight, shouldn’t I?)

Well, we were there in the field. Under and I. Waiting for the kids to get home, the tiny charcoal grill presiding over the gravel driveway…

I was drawing the

And then there was this strong wind. It had been breezy, getting chilly again. But now – the breeze built to a steady gust that sent last falls oak leaves skittering across the top of the long spring grass, sent the blossoms of the unspectacularly named but quite lovely street trees Japanese Ornamental Cherries – sent the swirling along the dry sunny sidewalk and it was all really quite lovely, with the latelateafternoon sun slanting across the field and the sky a dusty thin cloud blue.

Then Under starting running toward the street. His ears were held high as he bounded through the grass. (Surely that is a sentence that has been written before.)

Surely. I dropped the drawing and ran toward him, hollerin’ “Under!!!”

I scooped him up and held his tiny dog body (so fragile, just 11 lbs.! He is so scrappy and good natured that I forget he is only a small terrier.)

I tried to be a comfort. The part of me that lies to children ’cause I can’t stand the truth would say that Shiny had come on the wind. But, I know it was likely the scent of her still lingering somehow – blood or hair? Caught on a leaf turned over by the wind, on the side of the street she was hit on. Molecules that only a dog would notice sent flying northward over the field, the curse and blessing of the remarkable canine olfactory system.

Under and my most faithful hen

relaxing with me on the porch.

(The world must be a terribly confusing place to smart dogs.)

And so I called out exhausted from work. Managed to deliver two appropriately dressed, fed and brushed children to school on time (again! We are triumphant everyday now!) with school reading read and signed off on. Ventured into antique school auditorium – beautiful, this space – the stuff of dreams – to finish putting together the stage for the puppet plays my son’s class is putting on this Thursday night. Really quite a production, these puppet plays. The children are quite proud. Their stage looks much better now, though the draping is still off on the front. Easily fixed pre-production. My hands were flimsy and not good at pulling apart the pvc that I made the ‘stage’ out of.

How was it possible that I was still so tired? Weak feeling almost, in my knees and wrists.

The tattoo on my left hand (diamond) is a painful scar. Worst tattoo I’ve ever healed. It is a wreck from some dermal/subdermal infection. The infection is abating, but the tattoo is a mess. Whatever. I’ll deal with it. In the meantime, I’ve been wearing an army green knit mitten with the fingers cut off. Poor hand.

Had nice sincere exchange with mother of girl in boy’s class. Very very nice. I have a great amount of respect for this woman, a plucky breast cancer survivor who just went to Washington to speak about health care reform, but who I think used to be some sort of poppy eighties goth-punk? She is probably one of my favorite acquaintance friends. I think she’d be fun to make pie with. Actually, I just realized that my primary point of consideration in determining whether or not I actually like someone is the question of pie. Would they be fun to make pie with?

This fun to make pie with lady read some this weblog via facebook link and she was so genuinely complimentary that I felt sort of un-fatigued for a minute and thought about just going to work and being fabulous at the 10am Physics in a Baggie. But I knew that the tired would be tough to overcome and that it would simply become more tired…and that would just be too tired.

I refuse to let myself get any more tired and so I went home and went back to bed. Slept like a rock for three and 1/2 hours. Had the worst lucid dreams I have ever had. Maybe. The worst I’ve had in a while anyway. Bridges and pedestrians and trains and passengers waving (a man with a beard and a fisherman’s hat, thinner than the Ben and Jerry’s guy) and Shiny running and falling and hitting and rolling, and – oh! cruelty – getting up…and then falling from a bridge and my hand grasps a steel mending plate 4″ long, 1.5″ wide sides, 90 degree angle…and it comes off in my hand, two bolts still held in their holes, and then I see that I am far from shore and that I will land in the water between two monolithic bridge supports, and I am not really scared because I think I will just swim to shore. I am a good swimmer. And I hit the water and it is everything you’d expect it to be. Water-y and what not. When I surface there are plastic lawn chairs floating. Two of them, etched in black mildew in all corners and edges. And for some reason, I tried to hold onto to one of them, perhaps sit down? And it sank and underwater with the chair was interesting…and I only remember one other segment of the dream and my hair was much longer, but I looked awful.

I feel less tired after writing this. But, equally weary. Work just called. I didn’t answer the phone. It will all be fine. I am going to stop writing now. Go plant some pumpkin seeds in starter pots, experiment with the best way to propagate curcurbitacaea in WNC. Seems these plants are prone to a lot of bugs and fungal blights here. And yet they are great plants for food and bloom. I plan on sowing some seeds directly – on mounds amended with manure. I will experiment with water application and pest removal and monitor fungal occurences. Should be fun.

Thank goodness for gardens and terriers that don’t act like terriers. Kids, too.

And ranunculus – I need to finish drawing the ranunculus.